Kian and Dwayne tragically lost their lives in a car accident in Big Rapids, Michigan on May 3rd, 2022.

The boys became brothers when their parents Jennifer and Dwayne met in 2006. The older the boys got, the closer that they became.

Both Dwayne and Kian attended pre-school and grammar school in Park Rapids. They both went on to graduate from Park Rapids High School. Dwayne graduated in 2018, Kian graduated in 2019. During their years in school, both Dwayne and Kian were very dedicated wrestlers from early on in their middle school years. They both also played football for a number of years. Dwayne had played baseball, and Kian took part in Track and Field. Kian attended Prom multiple years from freshman through senior years. Dwayne attended Prom multiple years as well as was a member of the SnoDays nomination court in his junior year. They enjoyed their years in the programs with school, and more so the relationships made with all those that they came in contact with. The friends they made in school formed unbreakable bonds that carried into their short adult lives.

After graduation, both Dwayne and Kian worked various jobs in retail/sales type positions while they were trying to find their nitch in the world. Kian did some training and worked with their grandfather Conrad learning to be an electrician. During that time, Dwayne was working merchandising with SPAR Company while traveling the United States. Most recently, Dwayne was in Florida for a job. Kian had decided to go work with Dwayne and they were headed to their first week together in Michigan.

Dwayne and Kian had the most amazing sense of humor and undying faithfulness to the friends they called family. They were the most loving young men. They were passionate, intelligent, caring, genuine… They were dependable – whenever anyone called, they were there no matter what. They were always able to make friends easily and the friends that they made were treated like family always. Kian and Dwayne had an uncanny ability to lighten the mood when they saw a need. Kian would make a comment like “Nice weather we are having today” or Dwayne would find a way to make a laugh out of something.

Dwayne and Kian enjoyed gaming with “the boys”, which generally included their brothers as well. They enjoyed that time spent with friends. They were both dog lovers; their pups were always so excited to see them, lick on their faces, and play hard. Dwayne also thoroughly enjoyed singing and rapping.

They will be lovingly remembered and missed by their parents Dwayne and Jennifer Johnson, Brothers Justin, Randall (Trevon), Malik, and D’Andre, Nephew Aiden Branson, Grandparents; Adell Branson, Lynn Schmid, Randy and Marcia Jenkins, Many, many Aunts and Uncles, Cousins and Friends who became family.

Celebration of Life will be at the American Legion in Park Rapids on May 28th, 2022, from 12pm-4pm. Please join us as we celebrate the lives of our sons. “To know them is to love them” Gone too soon! 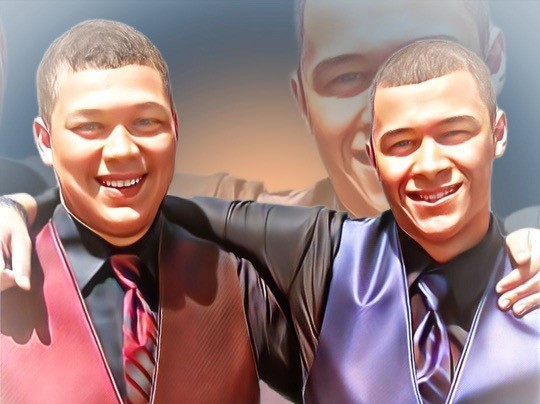